Top
"I hope you love the products I recommend! When you buy through links on maryjanesandgaloshes.com, I may earn an affiliate commission."

If sewing is your hobby then, let’s face it, you probably won’t need a fancy expensive sewing machine, and any basic unit will probably do it for you.

However, what happens if you require something a bit more durable?

In that case, you might want to look into a model like Singer 4432 sewing machine. Seriously, guys, this machine has “Heavy Duty” printed on its side, and if that doesn’t spark your interest, I don’t know what will. 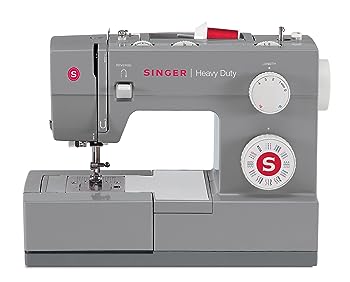 All jokes aside, Singer 4432 is an incredible piece of machinery that comes at a surprisingly low price, and if you want to find out more about it, our article is there to help!

A Word or Two about The Singer Company

Singer is probably the most well-known sewing machine company in the world, and in this section, I’m going to introduce you to it.

The company has a tradition that’s more than a century long! It was founded in the year 1851 in New York city but placed its quarters in La Vergne, Tennessee. For those who didn’t know, Singer was the first manufacturer of sewing machines for general and domestic use.

As one could expect from such a pioneering company, Singer is still one of the leading authorities in the world of sewing machines, and even though they have gotten some serious competition in the past century, no corporations have managed to replace them.

Cutting edge technologies, constant improvements, and impeccable engineering are the factors that make this company reliable and trustworthy to this very day. Heavy Duty 4432 is just one example of what Singer makes, and even if you decide that you don’t like it, we’d still encourage you to check out the other models that they offer.

The Things to know about Singer 4432 Sewing Machine

Here is a quick preview of the main characteristics of this machine.

If you like what you’ve seen so far then you absolutely have to keep reading as it only gets better!

The outer appearance of Singer 4432 causes a slight controversy among its users - some like the simplistic, old-school design, while others say that it looks, well, ugly. This is entirely a matter of preference, so I’m just going to describe its physical features.

The machine has a somewhat industrial look, with a lot of perpendicular lines and very few curves. One could even go as far as to say that its design is slightly “boxy.” On the side, there are two dials and a reverse button, while the top holds the thread and another three dials.

All in all, the unit’s appearance isn’t ultra-modern or trendy, nor does it try to be. The Singer 4432 sports a simplistic look which isn’t everyone’s cup of tea, but then again, this machine is all about functionality. 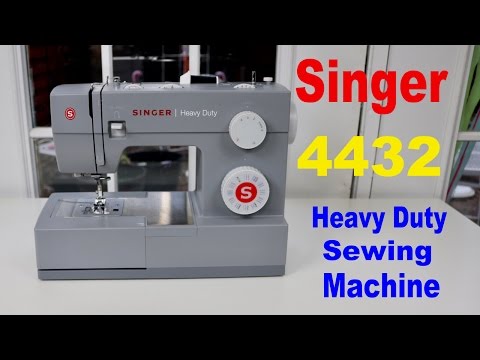 This sewing machine boasts with an array of useful features including 32 built-in stitches, very high stitching speed, and supreme durability. On top of this, it is very easy to operate and can be used by anyone from beginners to sewing experts.

Its main advantage is the heavy-duty metal frame, which makes it quite sturdy, but also gives it stability and reduces bumping, thus decreasing the possibility of making an error.

The machine has four different feet - zipper, buttonhole, button sewing, and all-purpose, all of which have adjustable pressure.

When it comes to speed, it’s safe to say that 4432 is a monster, as it is capable of producing an incredible 1100 stitches per minute. You also have the reverse stitch function which can be used to reinforce your work wherever it’s needed.

The dimensions of the machine are 15.2 x 12 x 6.2 inches, and with a weight of 17.42 pounds, it is a rather compact model so it can be moved around relatively easily.

For hassle-free threading, there is the automatic threading system, and the 1-step automatic buttonhole ripper is going to make this process as effortless as possible.

All the controls are mechanical and fully-manual, and nearly everything can be adjusted from stitch length and width to the tension of the thread. You can manipulate all of these elements fairly simply, using three dials.

A neat little addition is the Singer Sewing Assistant app which is going to answer all of your sewing-related questions, and it also includes tutorials and tips on how to use the machine properly.

Is The Singer 4432 a Good Choice for Quilters?

This is a very common question that comes up when discussing sewing machines, and we’re going to give our best to answer it. Singer 4432 isn’t the best, but it can be a good choice for quilters.

Let’s have a quick look at the features that quilters will like:

Ok, so the first and most significant feature that’s useful for quilting is the drop feed. This feed can be adjusted using a lever, and once you lower the feed teeth, you will be able to perform free-motion sewing, which is precisely what’s needed for quilting.

Another key characteristic is the free-arm, and it enables one to remove the storage compartment and let the material to slide around the arm of the device. The benefit of this feature is that it makes it easier to work with a lot of fabric.

Beginner quilters or those who are not fully confident in their abilities will probably be thrilled to learn that Singer included a quilting guide into this package.

As you’ve already read, this can stitch very fast, which can be a big advantage when quilting. Those who aren’t ready for such high speeds can always put less pressure on the foot pedal to make it slower.

Are there Any Negatives?

Now that you’ve learned about all the bright and shiny details of the 4432, it’s time to see where it’s lacking.

First, this might sound strange, but the stitching speed might be too fast for some users, especially beginners, who may find it intimidating. If you’ve never sewn before, maybe you should try a less potent machine.

Second, the machine shows some inconsistency when using it on different materials, so you just won’t get the same kinds of stitches on denim and leather.

Last, although the machine’s body is made of metal, it does have some plastic parts which give it a bit of a cheaper feel. This becomes noticeable when you compare it to other heavy-duty models, but all in all, it shouldn’t be a big issue for most users. 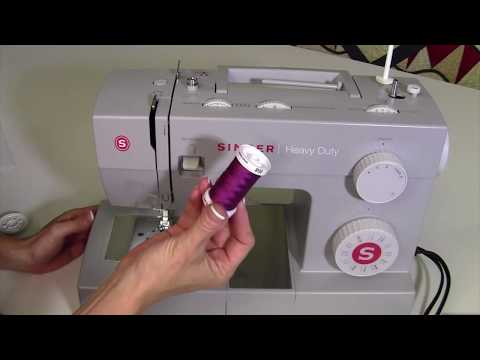 So, how can I sum this up? I want to start by mentioning that this machine is mainly aimed at folks looking for quality and durability to meet their large workloads, and want to get it at the lowest possible price.

The machine is super simple to operate, although it might be a bit intimidating for newbies. It’s going to allow you to do anything from sewing jeans to quilting, so its as versatile as most sewers need it to be.

Its size and weight are modest, so one could say that it is relatively portable. If all this wasn’t enough, the manufacturer also included a lot of practical accessories to spice things up.

I’m Mary, and sewing has been a part of my life since I was a little girl.

My passion for this craft is what inspired me to start this blog and review every sewing machine, embroidery machine, Cricut machine, ... on the market. I want to help passionate crafters choose the right craft tools.

With so many products out there, it’s hard to find the best materials to make your projects work but I’m here to make things easy for you. Whether you’re a beginner, intermediate or professional sewer, there is something for everyone in this craft corner.

Hopefully, you will find my content fun, helpful and informative. Don’t hesitate to contact me anytime if you need any assistance or advice. Have a wonderful day and happy crafting.